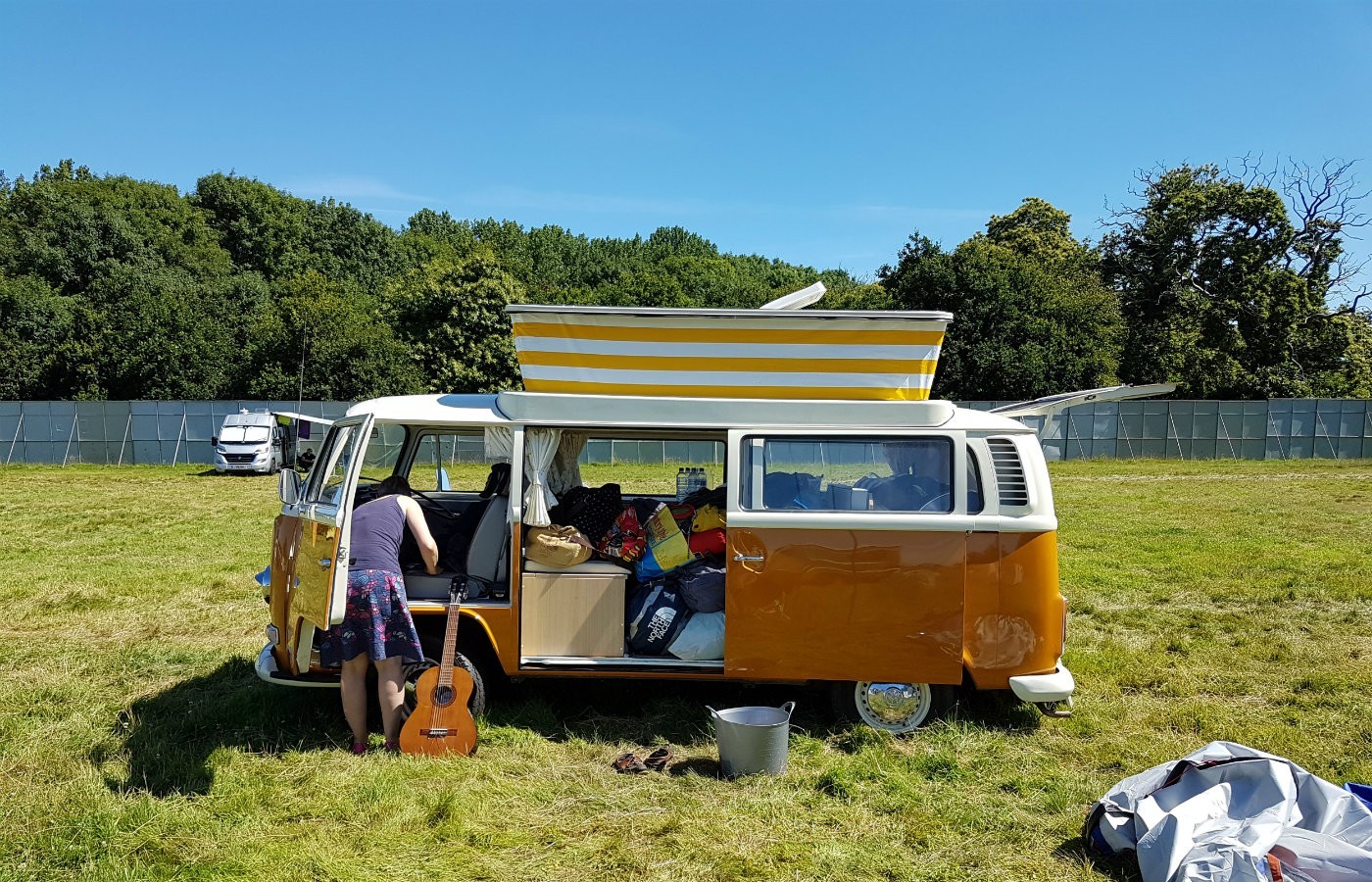 VW campervan a bit of luxury at Latitude Festival

We took our VW campervan Betty to the Latitude festival this year with a group of friends. There were 4 vans and a trailer tent in a corral around our bbq/firepit.

The photo shows us nearly ready to come home. The van is fully loaded with all our kids’ stuff. We slept in the van in the Latitude campervan field and the 4 kids, mostly grown up now, and girlfriend Charlotte slept in one of the tent fields.

Each day we cooked a communal breakfast on the bbq, pitching in the bacon and sausages as required. On the Sunday this turned into a relaxing brunch and by around 10.30 am we had cracked open the wine. The great thing about being at a festival is the total lack of responsibility. Do what you want when you want. The van’s stereo really came into its own with a Sunday morning Spotify playlist that included lots of laid back jazz – Louis Armstrong, Duke Ellington etc. We made it to the main arena for 2pm ish ready for the music.

We hardly knew any of the bands playing at Latitude but found enough there to enjoy ourselves. It’s a generational thing I think. At night on the way back to the van we stopped off at Keith Allen’s cabaret at the Alcove bar and drank frozen cocktails.

Each evening when we got back after the day’s festivities we would throw some slow burning logs on the fire pit and sit around drinking, toasting marshmallows and passing round the choccies.

Each campervan had its own awning. We had our porta potty in ours, tucked between the van and the inner door of the awning. This came in very handy. Normally if you are caught short on a campsite there is a handy hedge. Not at Latitude. They cram the vans in so much that there is nowhere discrete available and the walk to the official (and smelly) loos is miles. Lots of thirst quenching cold beers during the hot Latitude days had a knock on effect at night…

On the Monday when everyone was leaving we took our time to pack up. No point in rushing when the traffic is likely to be very heavy. Instead we chilled out and eventually set off for the seaside at Southwold for a spot of lunch.

It turned out to be the hottest day of the year but we happily trundled home at a steady 55mph with air conditioning going at full blast (ie windows down). The kids made it back before us and were abel to lend a hand emptying the van.

That night we had another bbq, this time on our Weber in the back garden, and went to bed early totally shattered but happy. What a great festival weekend.

Campervan Betty is available for hire for festivals and other holidays. Please get in touch if you’d like to know more.