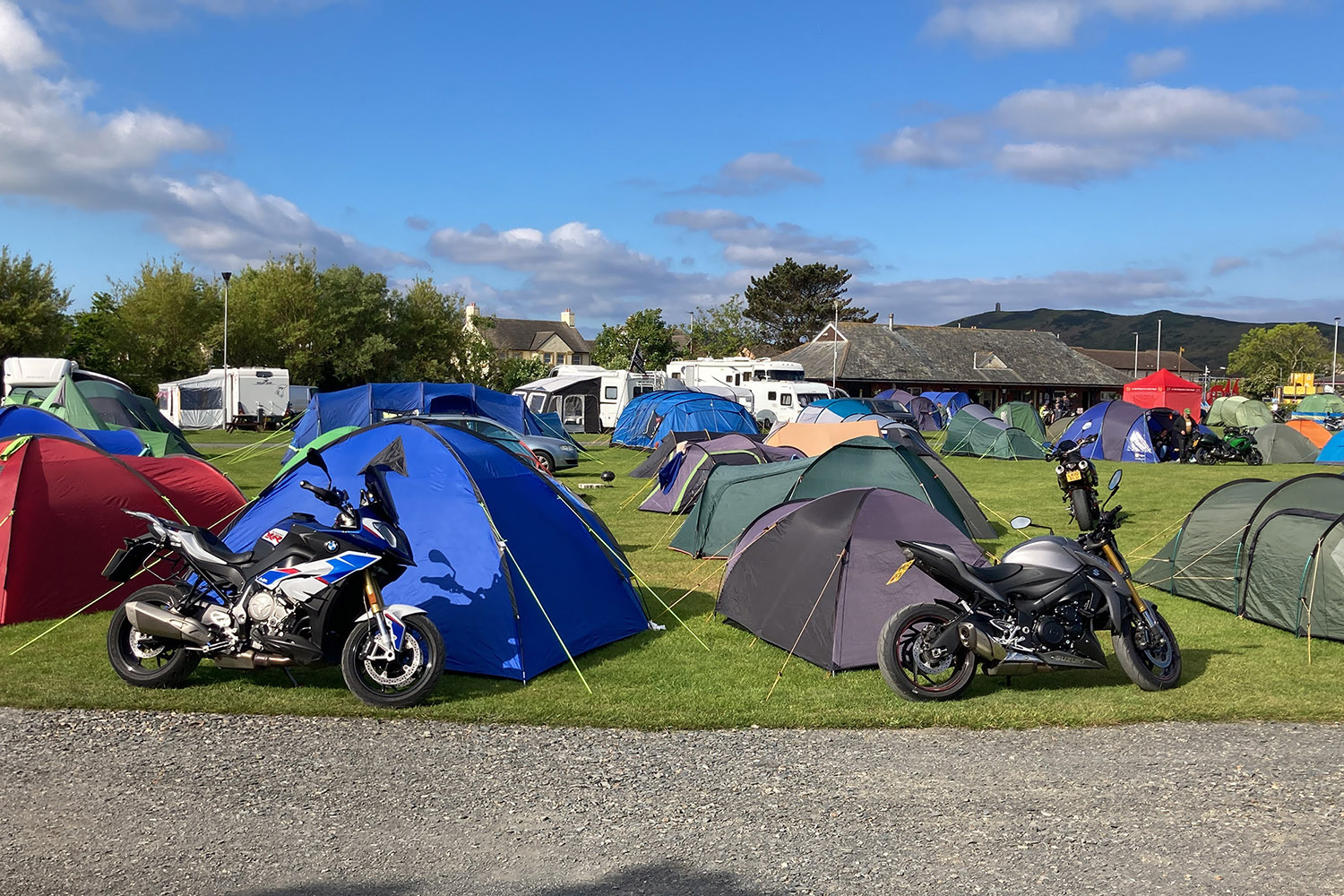 6am in Peel and half the campsite seems to be awake although still lots of snoring very much to be heard from some tents. We arrived at approximately 8pm last night being a bit late as a “white van” had broken down in front of us on the top deck of the boat.

Upon arrival we got the van ready and threw up the awning. I’ll need to redo the awning this morning. Not put this one up meself before. It’s an inflatable job and didn’t go up quite to plan. Who reads instructions anyway? 🙂

It is a glorious sunny day in the Isle of Man and excitement is starting to mount for the first TT races later on today. I grew up here but haven’t been a regular at the TT since I got married. School holidays are different in the Isle of Man and half term on the mainland never seemed to coincide with TT week.

We are here now anyway. Last night after setting up we strolled down and bought some fish and chips in the town and ate them on a picnic bench on the prom. Afterwards we mosied to the Marine pub and had a couple of pints before heading back for what we thought would be an early night but turned out to be 11.20pm which is very late for us.

Our first night in campervan Jade was very comfortable fair play. The newly upholstered bed (J&S Upholstery in Adwick le Street near Doncaster if you are interested – top professionals) exceeded expectations. We take a mattress cover, sheets and duvet with us but I think if I was on my own I would be comfortable enough in a sleeping bag.

Now I’m sat chillin out in the awning while Anne has a snooze before nipping to the local supermarket Shoprite which is just a couple of hundred yards down the road to buy some local Manx bacon and sausages for brekkie.

Although it is rammed with small biker tents I can really recommend Peel Campsite. Ian the manager had kept us spaces next to each other so that we could be next to our pals and we not only had  power but water too! Saved a bit of a walk to fill up the water container.

On an ongoing basis campervan Jade will have the original sink and fridge unit in and we prefill the sink before going off on a trip. However as this is really a test trip in a new van and the old fridge and water pump needed a bit of a refurb we took it out and left it back at the depot. The electric coolbox works as well as a fridge anyway and fridges in campervans are really just glorified coolboxes.

There is lots to do in the Isle of Man and specifically Peel but the plan for today is just to get sorted and head out to watch some racing. Stay tuned for more news on our trip as it happens.