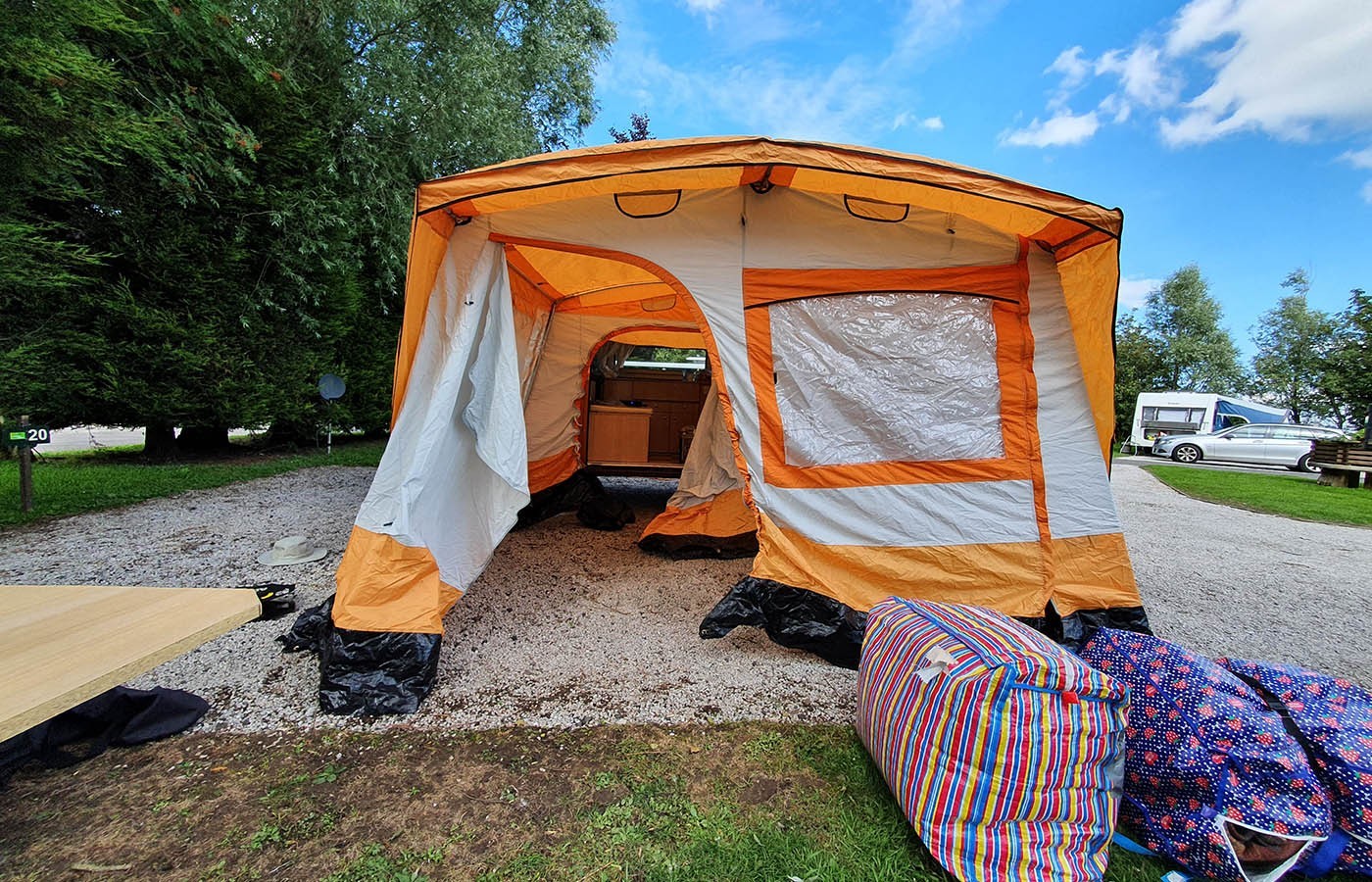 Longnor Wood Holiday Park is 68.1 miles from our house according to Google. If that was motorway all the way it should have taken us an hour and ten minutes. However much of the route was winding roads up hill and down dale with often the need to negotiate hairpin bends on a steep slope and the risk of tractors coming the other way. Amazingly campervan Betty negotiated these with no issue. It made us realise what great gearboxes they had on these vintage VWs. Our only problem arose on the single track road that represented the last half mile to the campsite. We encountered a tractor pulling a slurry trailer. There was no way we were going to argue with that and reversed back to the last passing point 🙂

Our friends Stephanie and Dave had arrived the previous day and were at the campsite to greet us. We settled into our pitch and felt a little superior when we found out that they hadn’t been able to erect their caravan awning. Theirs was a new van and they were missing a hook to pull it across (or something like that). We felt quite smug when our stand alone awning went up with no problem. We even made a conscious effort not to have an argument which can sometimes happen with these things. I think we must just be getting better at putting the awning up. The only issue we had was that we were on hard standing and it was difficult to get the pegs in. We prefer grass usually as it is more comfortable underfoot.

Poptop up, hookup connected and bed sorted we wandered over to the others to partake of their hospitality. The prosecco flowed and Steph had bought a few bits for afternoon tea. Parma ham, camembert and stuff like that.

Afterwards we walked to the pub in the village. This turned out to be a bit more of a stroll that anticipated. In fact it took 40 minutes and we were grateful of a cold beer sat outside as it was a warm evening. Now here’s the rub. It took us 40 minutes to get there downhill. Going back it was uphill all the way. Uhoh.

Steph and I decided to head back before the boys had finished their beers so that we could get the BBQ lit. Sometime later, it was more than 40 minutes, just as we arrived at the site a taxi rolled up. Tref and Dave had decided to have more beer and couldn’t face the walk! Lightweights!

That night it was early to bed which is usually the case when we are away in the campervan. We slipped on our eyeshades and fell into a deep and comfy sleep. We awoke at what must have been 4.30am to the wonderful sound of the dawn chorus. Being next to a wood there seemed to be a huge variety of bird song. It was the best choir I had ever heard. We nodded off again and slept naturally until maybe 8am.

I boiled the kettle and made us both a cuppa. Lying in bed we listened to the rain on the roof. Very relaxing and actually very cozy. We felt good that we were warm and dry and comfortable and it was nice to lie there listening to the rain.

Eventually we got up, slid the bed back into its day position and Tref got on with breakfast. We have these routines when we go away in a campervan. I do some jobs and Tref does the others, One of his is cooking the bacon. We ate breakfast in the awning as it was still drizzly but afterwards the rain stopped and we met the others at the appointed time to go into Buxton for the day.

Buxton is a lovely place to spend a few hours. It has a Victorian opera house with a conservatory and a nice big park, all donated by the Duke of Devonshire apparently and we passed a blue plaque telling us that Mary Queen of Scots had been there a few times to take the waters. Gosh. Sometime before the Victorian opera house was built obviously!

Eventually we met the others for lunch, sandwiches which we ate sat outside a pub. Then Tref and Dave went inside for beers whilst Steph and I went to the shops. Can you spot a recurring theme here? The boys argued that since the weather was not great the pub was the best place to be…

Back at the campsite we cooked fajitas on the stove in the campervan and sat outside finishing off the wine before hitting the hay again.

The next day it was more bacon sandwiches for brekkie plus toast using the remains of Tref’s home made sourdough bread. It seems we do a lot of eating on a weekend away in the campervan 🙂
It had been dry overnight so it didn’t take long to take the awning down, get packed up and ready to hit the road for Lincoln.

Our next trip away is September in campervan Bertie. The rest of the summer is booked up with hires although we still have a few slots available here and there. If you do want to hire one of our vans please feel free to get in touch.